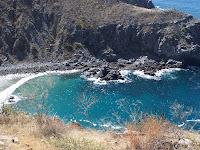 This is where we were headed last Sunday. We call it the Hidden Harbor. I hadn’t been there in 2 years (that’s an old photo on the left) and I wanted to show it to Greg who has never been there. It’s this beautiful beach here in Todos Santos but it is over hill and dale and quite a feat to get to. We were going to ride our mountain bikes and take the dogs with us. You have to go up a very long, steep dirt road and over some big hills and it would probably take about an hour or two on the bikes. So we packed up the truck with the dogs and our bikes and got to the place where we would start our ride. We looked for a place to park that would be out of the way and not be somewhere that somebody would want to break into the truck. So we pulled off the dirt road we were on and what do you know, we got STUCK! 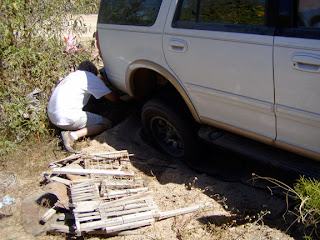 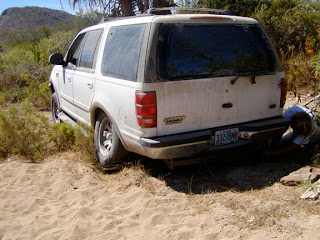 The dirt was so SOFT. Plus we didn’t see the hole that the tire embedded itself into. Anyway, it was just like getting stuck in the snow! The tires spun out! So we got out the jack and gathered whatever we could find to stuff under the tire and we preceded to get ourselves unstuck. Right as we were about to try it again, a nice Mexican family pulled up and offered to help. So they all piled out of their car and we positioned ourselves at the end of the truck to push as Greg gunned the engine. And it worked! We were unstuck! Yay! Course, this whole adventure took longer than we thought so we decided to can the mt. bike ride to the Hidden Harbor and go to one of our favorite beaches instead. Las Palmas Beach…which was not far from where we were at. We were happy to just relax after the dirt and sweat we got ourselves into and the dogs were happy to play in the water and get sandy. 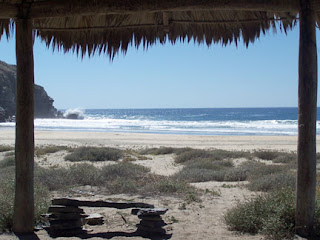 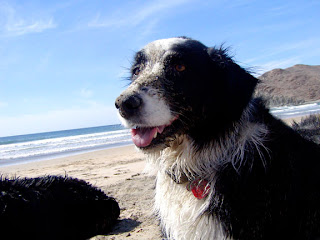 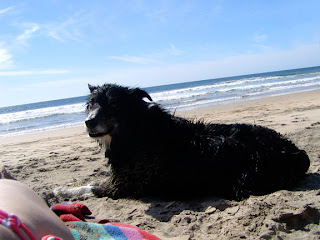 Here’s pics of Belle and Cody being happy beach dogs. And we were happy too and grateful we got ourselves unstuck! Oh, the adventures never cease!