I will admit it. I’m a weanie when it comes to swimming in big waves at the ocean so I don’t go in very deep when I see waves crashing. Since I’m not a mermaid, I decided at least I could paint one. 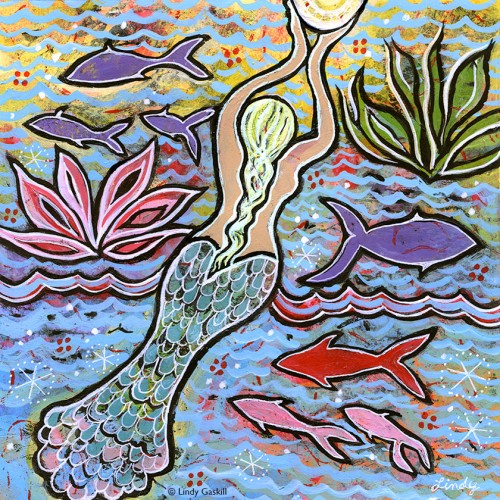 So here she is carrying the light through the depths of the deep blue sea.

There are prints for sale in my Etsy Shop.

Asssignment: Custom Portrait Painting –  be able to recognize person in photo, a jazz/music theme and include a sunflower along the side. Send me an email if you are interested in a portrait commission. lindy@artbylindy.com

We saw a lovely rainbow behind our house the other day.
It was so inspiring and peaceful to look at.

Looking at rainbows, reminds me of a Dolly Parton quote…

“The way I see it, if you want the rainbow,
you gotta put up with the rain.”
– Dolly Parton

…and my painting that was inspired by it.

She Wanted the Rainbow Print >

And then, Greg and I, as we were looking at the rainbow, recalled the day that we drove through one.

It was amazing. We were driving in my truck to go downtown. This is when we lived in Bend. We saw a rainbow in the distance and we were admiring it. And then, all of a sudden, we were in the rainbow! It was like a prism. There were thousands of rainbows all around us. And then we drove out the other side! And the rainbow was gone. If we hadn’t both experienced it, no one would believe it! We were in awe. Never had we heard of this happening. It was exhilarating and wonderful and a “once in a lifetime” experience. So we love reminiscing about being in a rainbow. “Remember the time…” Brings smiles. Have you ever heard of anything like that? Being inside a rainbow?

Sometimes I like to put figures in my work. Some of my early paintings from when I was in my 20’s had dancing yoga figures in them which I really like and have considered revisiting and creating more of.

These figures are what led to my sitting yoga people paintings. These are figures who are holding the energy which is represented by a swirly spiral. Atleast that is what I like to think of them doing. I call it the “Holding the Energy” series.

Detail from “She Wears a Tapestry of Ancient Colors”

I still like to create these little yoga folk. Below is the last one I made. My friend Pam owns this one. It’s titled “Holding the Energy VIII”.

Detail from “Holding the Energy VIII”, acrylic on paper.

And then I also have figures in my Blue Mountain series (although all the mountains aren’t always blue).

Detail from “Sing to the Mountain”

One of my favorites is the below painting.

“My House is as Big as the Moon”, acrylic on paper

I also have figures in my Native American motif series.

One of my newest paintings has a contemplative maiden in it. She’s holding a heart close.

“Feel Peace in Your Heart”, acrylic on wood

As I painted her, I wanted her form to look similar to my painting “She Wanted the Rainbow, So She Put Up with the Rain” which I did for a Fundraiser  called the “She Project” . The person who thought of this fundraiser gives the participants a saying and you have to spend 2 hours creating a painting and it has to include the saying you received. Then the paintings were put up for sale. I thought it was a fun and successful fundraiser. I participated in it 2 different times.

“She Wanted the Rainbow, So She Put Up with the Rain”, acrylic on paper

But my maiden holding the heart painting didn’t start out looking like the finished piece.

And that was nice but I didn’t really like how large she was and she was a bit too cartoon like. So I changed her.

And I have to say it was a bit of a light bulb going off in my head when I thought  of this. That once the paint is down, there is no reason why I can’t put more paint over the top and change it. There are no rules when it comes to art. I say do as you please.

That was how my thought process was working when I decided to paint over her. “Just do as you please. If you don’t like her, then change her”. It’s very freeing to change something if you don’t like it.  Wouldn’t you agree?

And as she developed, I did begin to like her.

I liked the peacefulness in her face and I liked thinking she holds peace in her heart.

Wishing you peace in your heart.